Bude is back and entries are open for this Awesome Foursome Quadrathlon on Saturday 11th September! A fantastic event in this beautiful seaside town on the Cornwall Coast. Every September since 2002  Simon Hammond and his Team from ‘Shorelineactivities’ run the Awesome Foursome Quadrathlon, an extreme multi-sport race for individuals, pairs and relay teams to enter. This is an established event in the British and European Quadrathlon calendar regularly being a World Cup ranking event or the European Short Course Championships.

The race makes the very most of Bude’s geography and features. The open water swim takes place within the shelter of Bude’s breakwater. The cycle ride includes some amazing coastal hills (including the 1 in 3 climb at Millook). The kayak leg takes place on the tranquil Bude canal. And the final run follows the canal towpath onto the coastal path and back to Bude. The fastest athletes will take around 3 hours to complete the course with most finished within 4 hours. 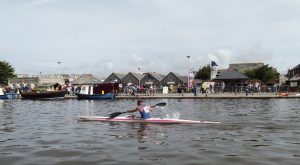 Entries must be received in advance. You can do this by going to our website and downloading an application form and following the instructions or by using our On-Line entry system. 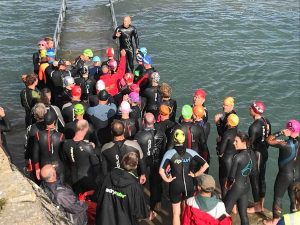 The event starts with an 800 m sea swim, a double loop within Summerleaze bay, protected by the breakwater. Next a 30 km cycle following the coast road to Widemouth, Wanson Mouth and Millook before meeting the A39 at Wainhouse Corner and returning to Bude. Then a 10 km Kayak paddle, which is a double loop of the Bude canal. And finally a 10 km run along the canal towpath to Helebridge, following the marked footpath across the fields to Widemouth and returning to Bude via the coastal path. The course has stayed the same since we first ran it in 2002.

Guarantied to be a fantastic weekend away …. not forgetting those Cornish Pasties and Cream Teas to replenish the muscles afterwards!