The World Championship – Sprint distance Quadrathlon, were held in Komarno, Slovakia on 12th August. Flying the Flag for GB was John Kavanagh and his sister Margaret Huyton. This is Margaret’s race Report, as you will read … as all wasn’t easy as their races unfolded!

After several days of very high temperatures, the day of the race saw cooler weather which was a relief to the British pair. strong winds did make the lake choppy and  conditions were very challenging, particularly on the down-wind turn where the wind whipped up the waves.

The start was on a beach, no wetsuits allowed. A swift run into the water and away everyone went. John was keen to beat his nearest age group rival Klaus, in order to score maximum points for the World Cup Series. John made 3 minutes on the swim, but Klaus clawed it back on the bike. The bike was 20km fast and flat flat 2, 10km loops with the closeness of the riders it was not always easy for the athletes to avoid drafting, the middle part of the field were troubled by this difficulty and several time penalties were given out, including John who had no recollection of drafting, but was given a 15 second time penalty! 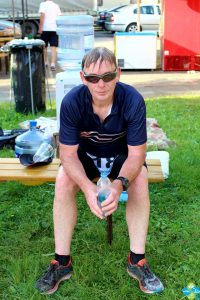 John did extremely well in his borrowed kayak and pulled back the lead, despite the footplate breaking, John went onto the run 2 minutes up. On the flat, grassy course Klaus was catching John, but John dug deep and held on and beat Klaus by 36 seconds. His time was 01.46.35.3, giving him the Gold Medal and securing his ‘Vet 60 WQF Championship Title’.

Meanwhile, Margaret was enjoying her first overseas quadrathlon. All went well until she arrived at the kayak transition …. her boat was not there! She saw an Italian paddling away in it. Fortunately there were kayaks which faster paddlers had already used so she had to take one of those. After an unsettling few minutes, racing resumed. The run was uneventful and Margaret finished with a time of 02.06.30.4. taking the Ladies Vet 60 Gold medal! Margaret did ask why the Italian took the boat …. his answer was ‘I am an inexperienced paddler and could not stay upright in the boat he had borrowed’! Margaret your a Star #thisgirlcan

A huge well done to them both for staying composed during racing, thank goodness its not every day your faced with a drafting penalty, a broken footplate and having to paddle a kayak you’ve never been in before! Thank-you for bringing home 2 championship medals for GB!

After a junior Tri, and then an open Tri, a relay race was held, swim, paddle and run. John made up a team with 2 German over 60s, Heinz Grohmann and Klaus Charlet called ‘The Seniors’. Whilst Margaret joined up with 2 young girls from Hungary and Czechoslovakia Bodolai Lili, Magdaléna Kolenová, called ‘Ladies International’ This was a fun event but taken seriously. Margaret’s younger team beat the seniors, coming 9th with John’s team coming 11th. Under Armour CZ won with the Spanish in 2nd place.

Both John and Margaret had brilliant day and wish to send ‘Many Thanks’ to the organisers Sport Club Slovakia, for 2 races in one day!

I must say the ‘Team race’ sounds a great idea … ‘Swim, Kayak. Run’ maybe that’s something the BQA should think about, especially at Sprint races?