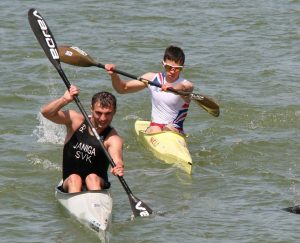 Conditions were very hot, approaching 30’C by the end of the race. Water temperatures high resulting in a non wet suit swim! Rob finished 4th in the Mens U23 category just missing out on a medal, finishing in 1.37.26. Whilst Phil also having a great race came 5th in the Vet 40 category in 1.34.57. There were some top class athletes racing and the standard of competition was extremely high, so a huge well done to Rob and Phil for flying the flag for GB Quadrathlon.

Here is Phil’s Story – Months of planning and the four full days of driving to get here are finally over. 80 smart looking bikes and kayaks are lined up ready, and a mass of bodies gather in the small lagoon beside the Danube.

The water’s surprisingly cold as we hang around waiting for the gun. The sun is hot but there’s a keen south-easterly breeze.Eventually they give up trying to get everyone five metres back to the line, and just set us off with no countdown. Missing the familiar buoyancy of the wetsuit, I try to settle into a rhythm. Swimmers are on a broad front, my one potential draft is zig-zagging everywhere so I go into a big space… looks like a large pack up there at the front. After the turn it’s more of a line, 2 or 3 wide, and a push for the jetty.

It’s the bike next, and we run up the steep grass embankment to the tarmac path along the Danube and mount up. I set to and go chasing, on the only leg where I have any real chance of gaining places. After a short section we turn back into the wind. Fortunately the torsos of these strong Czechs and Slovaks offer more windage than mine, so I creep up a dozen or so places. I count the people ahead as they go back the other way, I’ve got up to 34th. We turn again tightly by the ferry over to Hungary, and fly back with the following wind. Watch for the odd nasty hole and lumps in the tarmac, and overtaking cyclists coming the other way. I can’t catch any more.

Scuttle down the bank and round to the lagoon to my Kayak .. Gingerly paddle away, this felt so much harder after the biking …… With four laps it’s impossible to tell who is on which. Stylish paddlers (lots of them, including Rob) speed by, and there are a few sea kayaks to get past, I’m not comfortable in the waves. But as well as fatigue, confidence gradually builds with laps survived, and the lake is quieter now, I even manage to win a little personal sprint battle down the last back straight before reaching the jetty with relief. Great cheering as I land, but they are looking the other way – a Spaniard has just run across the line to win the race! 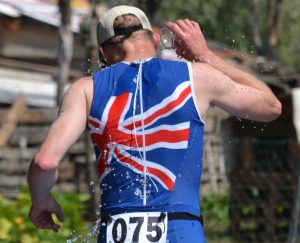 Excited commentary on the PA momentarily exceeds the flow of pumping dance music. A young Hungarian woman seems to have a short time penalty in the box and then races up the bank and off, as I start to plod behind with legs feeling like lead. The run is an unforgiving out and back on the tarmac, it must be around 30 degrees now. Some cool water feels good on my head, but this is hard and I haven’t much left to give. A man flies past looking fresh, then we catch the Slovak second placed woman and make the turn, I stretch my longer legs and overtake the petite Hungarian, trying to nail the move with a sustained push. The next guys are quite far ahead. I gain on them as one overtakes the other but we’ve run out of road, it’s gasping down the bank, onto the mat and there’s the line!

Now where, oh where is that cold shower?

Great Report Phil, thank you for sharing it with us all … and Congratulations, a very tough top class competition no medals this time, but it certainly sounds like a great experience and brilliant trip! (Jean BQA)